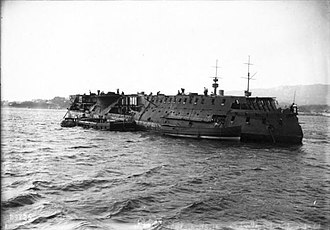 Ships have been recycled since the late 19th century. Wooden ships were torn apart and the wood salvaged for other properties, especially after a long journey at sea. Modern ships though,takes a whole different process called ship breaking.

Ship Breaking
Ship breaking or ship dismantling is primarily done in a ship yard in whatever city where the company may have won the auctined ship parts. Many poorer countries will purchase older ships for their recyclable metal value, to use to build their communities. SHips can be auctioned, and dismantled piece by piece then melted back down to an ore form. In an average year 29 million tons of steel can be dismantled and reproduced and sold back to the highest bidder. This is a large economy in may parts of the world, such as South east Asia where approximately 92% of all ships over 25 years of age are dismantled and repurposed.

The only dismantling in the USA is primarily in the military. Most shipping and cruise vessels are sold off to be repurposed over seas.