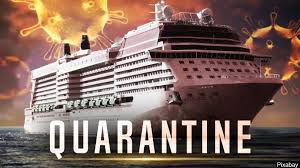 I have not seen this many cruise ships on television since the last time I watched Titanic..and that was long ..long ago. The more I think about it though, I started speculating about cruise ships for scrap metal and how much companies might get for scrubbing a ship. That is not necessarily what this is about, more or less will we see an influx of ships being scrapped at the hands of the invisible Covid -19 menace…or will they just douse the ships in massive amounts of Lysol and bleach and keep them moving along into charted waters with endless buffets and creepy swimming pools sloshing around with 2 parts margarita mixed in.

The reality and answer to that question is a resounding “no” of course not. Cruise ships have been quarantined and sanitized a million times over since the last time I was on one (2001). There have been a couple of pandemics in the last 20 years that spread to far more people than what we are seeing today. So no, cruising is here to stay. And did I say “Lysol” as the disinfectant? Surely I jest, Lysol is so mundane..try Virox,which actually sounds like a worse product and less friendly than the virus it is eradicating. This type of product kills surface germs almost instantly..emphasis on almost..more like 30 seconds after some research. So again, scrapping the ship..not worth it. The average cruise ship is scrapped (generally post catastrophe) weighs about 150,000 tons and depending on current market price. With current tonnage at about $80 per ton, the math just doesn’t work out. Plus, it is generally an insurance claim over a major catastrophe..not germs. Either way, the cost of replacing said ship would run closer to $400 per ton once it was all said and built..and somebody has to eat that buffet of cash one day.

So during these times of uncertainty, rest assured when things get back to normal, your stateroom, your pool on the high seas and your buffet will be waiting.